You are here: Home / Stirling Square and St Matthew’s Church

Guildford was planned around a church square, located at the exact centre point of the town.   This highlights the importance of the Church in society at that time.   The layout of the square is also significant due to civic buildings close by including the Courthouse and Colonial Gaol, both still in existence.  The area was originally called Church Square, later renamed as Stirling Square to recognise Captain James Stirling, the first Governor of Western Australia. 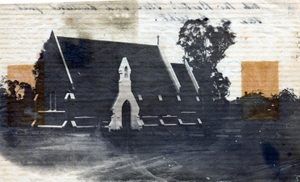 The second St Matthew’s Church prior to 1872

The first Anglican Church was constructed here in 1836.  By the 1850’s it was in a state of disrepair.  A second church was built in 1860 and named St Matthew’s Church.  In 1872 disaster struck when it blew down in a hurricane – a baptism was taking place inside the church at the same time!   In record time parishioners raised funds to build a third Church, consecrated in 1873.

Stirling Square includes a War memorial erected in 1920 to honour soldiers from World War I.  Family names inscribed on the memorial include Hamersley, Drake-Brockman and Devenish – all sons of prominent early settlers.  Not all names of soldiers who lost their lives are included.  Families were expected to pay to have their loved one’s name added, and some people could not afford the expense.

After World War II, two twenty five pounder field guns were placed in the Square.  The guns reflect Guildford’s long artillery traditions dating from 1913, when an Artillery Battery occupied  the South Guildford Military Reserve.  Every November Gunner‘s Day is commemorated with a parade, followed by a service in St Matthew‘s Church.

The Memorial Gates were built in 1929 to commemorate the State’s Centenary year of settlement.  They were restored and rededicated in 2012. 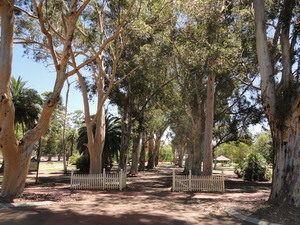 The stately Sugar Gum trees (Eucalyptus cladocalyx) were planted in 1890 for Queen Victoria’s Diamond Jubilee.  These trees are not native to Western Australia, but come from South Australia.  In 1999 local Council planned to fell the trees, but the people of Guildford successfully campaigned against the idea.  A commemoration bench placed in Stirling Square in 2009 recognises the people’s win in saving the trees.