The Guildford Courthouse was built in 1866, twenty five years after the nearby Gaol was opened.  Previously  court proceedings had been conducted in a room at the Gaol.

When convicts came to Western Australia (1850-1868), their labour was used for major public building programs.  By 1865 it was known that convict transportation would cease in 1868.  Governor John Hampton hastened to make full use of convict labour while he could, resulting in the construction of the courthouse plus an extension to the Gaol.

Government architect Richard Roach Jewell designed the courthouse – he also designed Government House and the Town Hall in Perth.  The design is Victorian Georgian-style with a steeply pitched shingled roof (now corrugated iron) on a timber frame. The bricks are hand-made and laid in the Flemish bond pattern – a typical Jewell feature.   When the Courthouse was officially opened in 1867 a lavish ball for 200 guests was held, hosted by resident magistrate Samuel Viveash and Guildford Town Trust chairman Alfred Waylen. 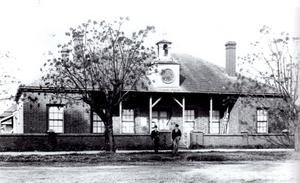 Following the installation of a public clock on the Perth Town Hall in 1870, the Guildford Town Trust petitioned the Governor to allow the old turret clock on the Perth Public Offices be moved to the Guildford Courthouse. The request was agreed to and the clock was installed at the summit of the roof.  After a storm in 1872, the clock was moved to a less exposed position over the entrance.  Here it served as the town’s public timepiece, until a clock tower was added to the Guildford Post Office in 1901.

The courthouse played a prominent role in the development of representative and local government in Western Australia.  The first Legislative Council election for the Swan District was conducted at the courthouse on December 3, 1867 and the first Swan Districts Roads Board Committee election was held at the same location on September 21, 1868.

At various times the building has also been used as a hall by the Returned Services League and the Red Cross.

The courthouse also incorporated a police station – continued to be used until November 16, 1969, when the police force moved to a station in Midland.  The courthouse building is currently in use as the Swan Valley Visitor Centre. 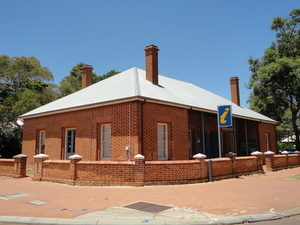