Only ten years after European settlement it was apparent a gaol was needed in Guildford.  Three public houses or  “pubs” in the town lead to charges of drunk and disorderly conduct, but nowhere to lock offenders up.

In 1840, John Welbourne, local jack of all trades was granted £80 ($160) to build a gaol, consisting of two cells, and a constable’s room.  He was a carpenter by trade, also the police constable, postmaster and a member of the Guildford Town Trust.  In addition he run an undertaking business from his home at 43 Market Street.  Later he built and owned the Stirling Arms Hotel.  This meant patrons could drink at Welbourne’s hotel, be arrested for drunken behaviour, and then locked up at the Gaol to sleep it off!

Guildford Gaol in the 1940s

Convict labour was used in 1851 to build a gaol extension, including a  police married quarters, small justice room and seven more cells.  A larger magistrate’s (justice) room was added in 1853, and horse stables were built alongside the Gaol in 1857.

In 1867 a wall in the magistrate’s room was demolished, incorporating the adjoining cell into the main building.  Four new cells were added, plus a day room.  The following year, a large exercise yard for prisoners was added at the rear of the building.

The Gaol hosted its most famous inmate, Bushranger Moondyne Joe in 1869. He had escaped from Fremantle Gaol, and was captured nearly two years later in the wine cellar at Houghton’s Winery in the Swan Valley.  He spent a brief time at the Gaol before being escorted back to Fremantle. 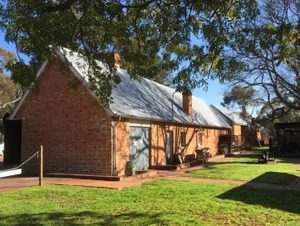 By 1948 much of the Gaol and the horse stables had been demolished.  In the 1970’s, demolition of the remaining building was considered.  Fortunately it was saved by the then Shire of Swan, renovated and handed over the Swan-Guildford Historical Society to be used as a museum.

Today it remains a significant building, one of few examples of public buildings dating back to the early decades of colonial settlement.

The Gaol is on these Heritage Listings: