The Mechanics Institute in Meadow Street was designed by government architect Richard Roach Jewell, who also designed the nearby courthouse building.  It is a fine example of a public/civic building dating from the early decades of colonial settlement in Western Australia.  The Guildford Mechanics Institute was formed in 1862 by wealthy land owners and businessmen of the Swan District, with the objective of improving education for the working/trades men of the town.  At the time it was not thought necessary for girls to be educated. 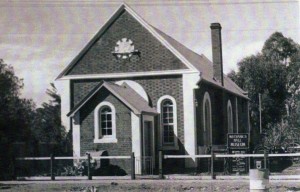 Construction began in 1865.  At its completion in 1868, it was the first public hall in the area.  It was used for public meetings, lectures, concerts, educational workshops, and also housed a lending library of educational books for young men.  Today the building continues to be in constant use for meetings and workshops, demonstrating the importance of the Institute in Guildford. 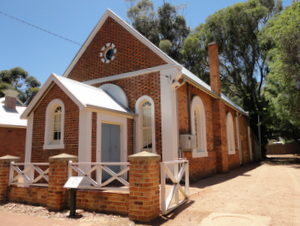 Although the Mechanics Institute was set up to educate the working class, top positions such as President or Vice President were usually filled by wealthy local politicians or businessmen.  This arrangement typified the social divide that existed in the fledgling Swan River Colony during the second half of the 1800’s.

Mechanics Institutes were the forerunners of public libraries, later established in all areas of the State.