You are here: Home / Places

Guildford was one of the first places in Western Australia to be settled by Europeans in 1829.

Previously, Aboriginal people had gathered in the area they knew as Mandoon, for over 40,000 years.  Their careful method of fire stick farming greatly impressed Captain James Stirling’s expedition party during his exploration up the Swan River in 1827.  Stirling reported to the British Government the land was suitable to form a free settlement, and then led the first group of settlers to the Swan River Colony two years later.

The early years were hard, due to a lack of manpower, money and exhaustion of the viable land.  Although initial contact with Aborigines had been friendly, conflict began as they were forced away from their traditional hunting grounds, in favour of clearing land for farming.  A petition was made to England for convict labour to help the struggling Colony.  As a result, convict transportation began in 1850.  Over the next eighteen years, 10,000 male convicts arrived.  In 1868, transportation to all colonies ceased.

The Guildford convict hiring depot, established in 1852 was located on the corner of James and Meadow Streets.  Here, well behaved convicts, granted conditional release via a ‘ticket of leave’ were available for hire to farmers and business men, as they worked towards completing their sentences.  A strict 10pm curfew was in force at the Depot.  Today, a replica curfew bell can be seen next to the Colonial Gaol.

With convict labour, the scrub at Stirling Square was cleared.  Roads and bridges were built, Government buildings were erectd, and land cleared for farming.  Some examples of convict labour is evident along Meadow Street, including the Mechanics Institute, sections of the Gaol, and the Courthouse.  Barkers Bridge over the Swan River was also built by convicts. 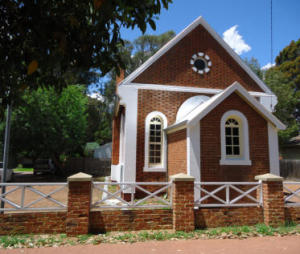 In 1881, the railway connecting Guildford with Perth and Fremantle created a new era in the town.  Guildford became a suburb of choice for the wealthy, with some lovely homes built in the area.

During World War I, Guildford played an important role with a remount depot in South Guildford, home to the Western Australian 10th Light Horse Regiment.  Again, during the second World War, Guildford Grammar School was requisitioned by the American troops as the 5th Station Military Hospital. 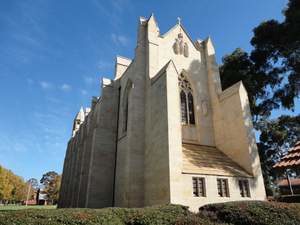 The town was declared a National Trust Historic Town in 1984.  In 2019 Guildford town was added to the State Heritage Register of Places, the first to be registered under the new Heritage Act 2018.