You are here: Home / Fenians in the Swan River Colony

In 1868 an unusual event took place, when a group of 62 Irish political prisoners known as Fenians were transported to Western Australia.  The previous year, forty five civilians and seventeen military prisoners had been charged with treasonable acts arising from their opposition to British government, and the fight for home rule in Ireland.

Founded in America in 1858 by John O’Mahoney, the movement known as the Irish Republican Brotherhood was bankrolled through support from Irish immigrants who migrated to America after the potato famine in the 1840’s.  In Ireland, James Stephens worked with O’Mahoney, recruiting Irish soldiers for the Brotherhood. The plan was to infiltrate the British Army and then overthrow British rule in Ireland through armed rebellion.

On a very hot day in January 1868, the Fenians arrived as part of the last contingent of convicts to be transported to the Colony, aboard the ship Hougoumont.  It was noted  “the summer heat which greeted the Fenians when the Hougoumont dropped anchor off Fremantle on 9th January was most distressing for the prisoners.”  Twenty prisoners bound for Guildford then endured a two day march before arriving to work at a stone quarry near the town.  Warder McGarry who had also arrived on the Hougoumont was in charge of the quarry party west of Guildford.  The remainder of the Fenians were consigned to convict depots at Fremantle or Bunbury.

Warder McGarry, who also arrived on the Hougoumont, was in charge of the quarry party west of Guildford.  Some Fenians under his supervision included Patrick Wall, Jeremiah O’Donovan, Con Mahoney, Hugh Brophy, Martin Hogan, Joseph Nunan (or Noonan), brothers Luke and Laurance Fulham, and James Reilly.

There arose such an outcry of protest in England, Ireland, and also by locals in the Swan River Colony about the harsh treatment of the Fenians, that within two years of their arrival, Queen Victoria decreed some of the prisoners be pardoned.  Instructions dated 26th March 1869 and received in May were sent from England to the acting Governor of Western Australia,  granting the civilian Fenians the benefit of the royal clemency without delay. “They were assembled as soon as possible at Guildford where on 15 May 1869, they received their free pardons”. (Erickson, page 139).

Many pardoned Fenians immediately left the Colony for Sydney or Melbourne. Some returned to Ireland, or to America to continue making plans for Ireland’s freedom.  The Irish Republican Brotherhood was the forerunner of the Irish Republican Army (IRA), and the continuing ‘troubles’ in Northern Ireland in the 20th Century.

Some Fenians chose to stay, including Jeremiah O’Donovan,  employed as a groom to W.L. Brockman at Guildford.  Con Mahoney worked as a clerk in Guildford.  Another who stayed was Joseph Noonan, convict number 9837. He was described as 5 ft 8 ins (173 cm) tall, with brown hair, blue eyes and a long face, fresh complexion and healthy appearance.  Noted distinguishing marks on his body included a cut on the ball of his thumb, two teeth protruding from his palate and a boil on his left thigh. 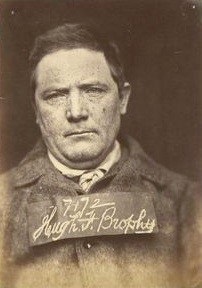 Noonan quickly established a partnership with fellow Fenian, Hugh Brophy, in a successful bridge building and construction company.  They won a number of contracts from the Catholic Church, the government, and private enterprise, and hired ticket-of-leave men to do stone cutting, carpentry and labouring.  Their buildings include Walter Padbury’s store and residence in Guildford, the Greenough Flats police station, the convent for the Sisters of Mercy in Goderich Street Perth, the Royal Hotel on the corner of Wellington and William Streets in Perth, and St. Patrick’s church in York.  It is believed Noonan was involved in planning the Perth Town Hall and St. Mary’s Cathedral.  Noonan lived in Howick Street Perth for the rest of his life, maintaining his republican beliefs to the end.  At just 44 years of age, he contracted tuberculosis, and died on 18th May 1885.   He is buried at the pioneer Cemetery in East Perth.

His partner, Hugh Brophy had left the partnership in 1872, settling in  Melbourne.  Brophy died on 11th June 1919, and is buried at Melbourne General Cemetery.