You are here: Home / Our Museum / Colonial Gaol 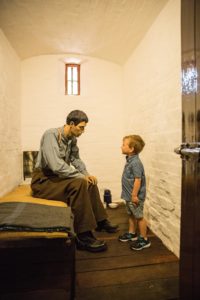 The Colonial Gaol was build in several stages between 1841 and 1867.  Soon after settlement (1829) it was apparent a local lockup was necessary.  Three hotels in the town lead to a rise in drunk and disorderly conduct.  In addition, employers at that time were allowed to pay their staff in part with liquor, resulting in more drunken citizens and rowdy behaviour.  To solve the problem a two cell lock up plus a constable’s room was constructed in 1841.

Over the years, the Gaol (really a small lock up) contained people for all types of crimes, including overnight stays to sleep off the ravages of drink.  More serious criminals were locked up temporarily, then transferred to either Perth or Fremantle Gaol to await trial and sentencing.

Parts of the Gaol were built by convict labour between 1850 to 1868.  A Magistrate’s room was added in 1853.  Here cases were heard for thirteen years, until the Guildford Court House (now the Swan Valley Visitor’s Centre) was built.  At its full capacity, the Gaol had eleven cells.  A large exercise yard was added in 1868, and a horse stable nearby.  Other buildings in the justice complex included houses for the the Police Sergeant and Police Constable nearby.   Demolition of some sections of the building started from 1917.  The horse stables were demolished in 1949.  Today only four cells, and the Magistrate’s Room (called the Justice Room) remain.

The Colonial Gaol was operational until 1969 as a police station.  In that year the building was closed, and the police moved to nearby Midland.  The building is a wonderful example of Colonial architecture.  We invite you to visit us and take a guided tour, and learn more about Law and Order in Guildford.